What is Interdisciplinary Studies? (IDC4UX)

Interdisciplinary Studies is a curriculum designed to analyze the ways in which different disciplines combine and interconnect in a particular field. In ConneXions, we study how History, Geography (including Economics)  English and Media studies combine in the field of international development through the perspectives of social justice and global citizenship. To build a foundation for understanding these perspectives, students analyze the interdisciplinary products--novels and films--pictured above.

Perhaps the most revolutionary one is Memory of Fire, the first book in a trilogy by Marxist historian Eduardo Galeano. He believes that History needed to be rescued from the "Region of the Dead ... [a region where students] should resign [themselves] with drained consciences to the present: not to make history... but to accept it". Galeano was saddened by students who had not been taught to see History as a road map for understanding social injustice. His solution to this problem? Weave together the writing styles of different disciplines. He says, "I don't know if [this trilogy] is a novel or essay or epic poem or testament or chronicle ... I do not believe in the frontiers that, according to literature's customs officers, separate the forms." (Galeano, XV).   Frontiers and forms just create walls that prevent valuable social justice work from succeeding.

Galeano's trilogy is also significant to this program as it focuses on Latin America. Haiti and Latin America, specifically the former Maya and Inca heartlands, are the focus of the program. However, through key concepts associated with hyper-capitalism (growth of trans-national corporations) globalization and resource exploitation, the curriculum also touches on regions in Africa and Asia.

Alumnus Nicole Brandt, who is featured on our character education page, is an example of a guest presenter who will explain the interdisciplinary nature of international development; not only will she explain how an understanding of history, geography, English, and modern languages come together in her field, but also she will help the students see the possibilities for further study and employment in international development.

In the course's culminating project, students create websites linked to this one. Like this site, students will have a character education page where they chronicle their journey to global citizenship with an in-depth section on their Global Learner trip to Ecuador. Their sites will have a media page with a full analysis of the course featured film, Machuca. In addition, their websites will feature one of the novels pictured below; each has a social justice theme. In addition to written analysis of aspects of the novel, students make connections:  text to self connections through blogs; text to other texts, including films;  and text to world connections by building links to the pages of news sites and websites of non-government organizations (NGOs)  dedicated to social justice, global citizenship or international development.

Students have also written short stories set in the present day iwith the addition of historical details about Spanish colonialism.  The stories are printed in book form for an intermediate reader. Illustrations will be included but in the form of film storyboards.

An Obstacle to Connection: 'Otherness' and 'The Other' 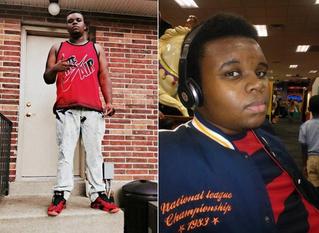 We begin the course with a study of "otherness" through a variety of texts. We identify the exotic other, the dangerous other, the pitied other, and the humorous other as typical portrayals in our culture. The contrast in the two photos of Michael Brown, the unarmed teen shot by a white police officer in Missouri in 2014, illustrates the media's use of the dangerous other in its reporting.